Building societies continue to demonstrate that they offer greater value to long-suffering savers than the majority of banks, figures produced by Savings Champion has shown.

A significant percentage more building society accounts (81%) pay a higher interest rate than the base rate in comparison to banks (58%), a trend that has continued throughout the last six years.

Whilst savings rates on the whole have struggled and tumbled downwards - especially since the introduction of the Funding For Lending scheme and more recently the Term Funding scheme and the reduction in the base rate last year - shockingly the average live variable rate from banks has halved in the last five years.

Throughout 2016, building societies have, on average, paid significantly higher rates than their banking counterparts, 1.09% versus 0.81%.

Susan Hannums, Director at Independent Savings Advice site Savingschampion.co.uk says: “These figures highlight some of the stark differences between the two types of provider, with building societies demonstrating a greater commitment to treating their customers more fairly than some of their banking counterparts.

Whilst there are exceptions within each group, in particular the challenger banks, which continue to support savers with better rates on offer for those looking to open accounts, on the whole the figures tell an interesting story for customers of both groups.

Sadly, traditional banks continue to demonstrate their reluctance to encourage both new and existing customers to put their money with them and those who hold low-paying accounts with them need to switch to a better alternative.

Average rates can be a good indicator overall about the two groups and the direction they are moving, but it remains vital to keep an eye on the best rates on offer and grab them when you can. Savings Champion are here to support savers and make this task easier with our independent best buy tables and our Rate Tracker service, where savers can check the interest rates on their accounts for free.

As always, our advice is to not accept low-paying accounts and rate cuts, but to vote with your feet and improve your returns by switching to a better deal”.

Average interest rates based on £10,000 invested, including all live and closed variable rate savings accounts. 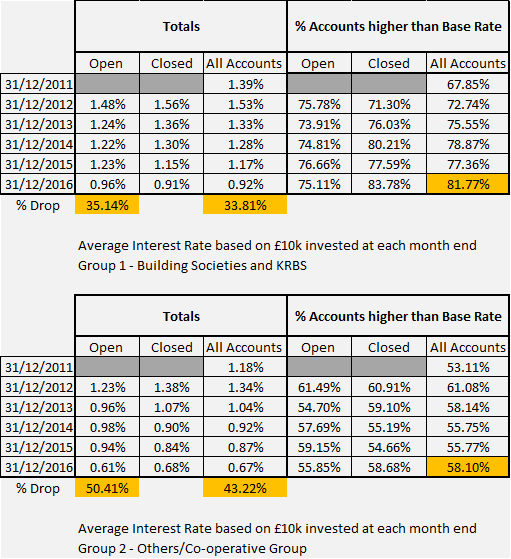 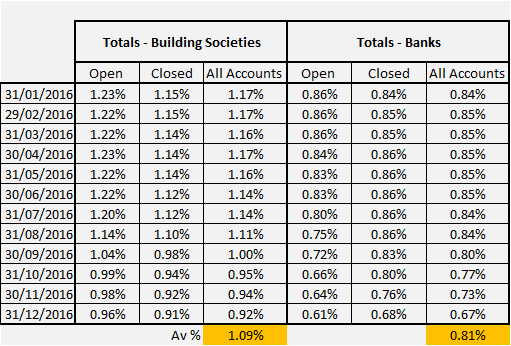